People wonder whether the One rooted in Witnessing Consciousness can be active? Isn’t witnessing akin to escapism? Pujya Gurudevshri unequivocally answers these questions and illustrates the glory of witnessing

Generally, the human mind becomes active at the age of 3-4 years and remains occupied till the end of life. Naturally then, the mind gets fatigued. And a tired mind cannot be creative. However, an Enlightened Master who has attained the no-mind state is creative, for He can keep the mind at rest, energetic, sensitive, and always at His beck and call. Whenever He uses His mind, say to speak, His words come out with such strength and a miraculous magnetism that they effortlessly become authoritative. They become the self-authenticated truth.

The Witness is Creative

You may wonder whether such an Enlightened One living as a Witness can survive in the society? Can perform activities? Can sing? Does He dance?

It is very natural for the mind to raise such questions. Mind is a doer and wants to be busy all the time, while witnessing is a state of non-doing. When the mind sees the possibility of you becoming a witness it fears its own death. It knows that it can survive only as long as you remain unaware. And so, it will raise doubts, or create problems, confusion, hesitation in taking the leap into the unknown. It will try to pull you back, and convince you that, ‘Your security and efficiency lies in being with me. For becoming a Witness, you will have to let go of your security. You will become inactive and incapable of living in the world. You will not be happy. The fun of singing and dancing will exit from your life.’

Only saints like Meerabai and Chaitanya Mahaprabhu know what it is to dance. The ignorant ones only know the steps. Those who live in their minds live in ego, and ego cannot dance, it can only exhibit. True dance is possible only when you become a Witness. You become so blissful that the bliss floods out of you. That alone is dance. The song manifests by itself. Only then can you taste the joy of life.

You may feel concerned how you will remain active as a Witness, because you think a Witness is just a spectator who remains aloof and does not participate in the game of life. However, the one who has attained the state of witnessing is not a spectator. He participates, and efficiently plays His roles as ordained by His past karmas.

He is not an escapist either. In fact, He lives life fully, profoundly, and in awareness. He also gets up, sits, walks, and moves about like others but with awareness. A new beauty manifests in His life. His actions emanate fragrance of His inner virtues. He performs actions but does not get bound by them. He remains untouched and untainted. He may be seen active in the world and yet the world doesn’t enter His heart. He is in the world but not of the world. This is the meaning of witnessing Consciousness.

The awakened Consciousness is not against activities but He is free from doership. And so the action of the Witness has a special touch of excellence. He does not teach you to run away from the world but rather instructs to stay fully aware and fulfil your duties.

Detached actions are not to be done, they happen when you remain a Witness. If you try to do them, you will become attached to them. If you have any desire, your actions cannot be without attachment. And then you will not be able to remain unaffected by them.

Remember, the mind does not become quiet by doing detached activities, but through a quiet mind, the actions become detached. Detached action is possible only when the mind is silent. More the peace and satisfaction the mind has, greater is the dissolution of attachment from the action. Restlessness of the mind is the birthplace of attachment. Hence, the Enlightened One advises to change one’s self and not just the action.

The Root of Actions

Actions depend on what you are. Expecting actions to be non-attached without you changing is not possible. You are the root where actions arise.

This is like someone wishing that big flowers blossom on a tree without caring for it. Flowers cannot be grown by force. The making of a flower begins from the roots and travels up; its journey ends by manifesting on the branches. What you see is only an expression, not a place of creation. The creation happens in the unknown.

Actions are like the flower. They are not created where they are seen. They are created in deep darkness, in the unknown and the unseen, and manifest at some point of time. A man commits a murder. You say he killed. But killing someone is not an easy task. That action was getting created within, in his belief, in his inclinations. And one day, it manifests and you see it. You see only the presentation, but not the long preparation that has gone into it. Therefore, by changing only the action, you are wishing to change the expression, without changing anything at its root.

Trying to change your conduct without making any inner changes makes you a hypocrite. Because even society stresses on outer changes, no efforts are put in to bring about an inner transformation. One is under pressure of changing the behaviour either because of fear of being criticised, or because one gains respect by doing so. Life becomes stressful, full of suppressions, and dead like a withered flower.

The Enlightened Ones say that behaviour is only an indicator. If the conduct is not truthful, it shows that your heart is capable of creating lies. Actions speak what is within you. Recognise your inner state from your external behaviour, go within and bring about a transformation there.

To bring changes within is religion and to change external behaviour is ethics. The religious person is ethical, for he whose heart is pure his behaviour will also reflect the same purity. But the converse is not necessarily true. This is because to change one’s behaviour, one does not have to change one’s inside. Disparity between inside and outside behaviour causes stress. The desire may be to speak lies but the need to look virtuous forces you to speak the truth. Thus, your life becomes full of contradictions and conflicts. Compared to you, the vicious ones are less troubled because at least there is sameness within and without.

But the so-called virtuous one lives a dual life. In his heart lies the criminal and in his activities is a saint. Therefore, there is always anxiety and confusion within. There are just two ways by which he can come out of this self-created stress – either he stops showing he is good or he becomes good. If he wants to walk the spiritual path, he must without choice bring about an inner transformation. That will certainly bring changes in his outer behaviour. Therefore, the Enlightened Ones emphasise upon inner revolution by which one can remain detached, happy, and creatively active. That alone is the eternal conduct of the Wise Ones. 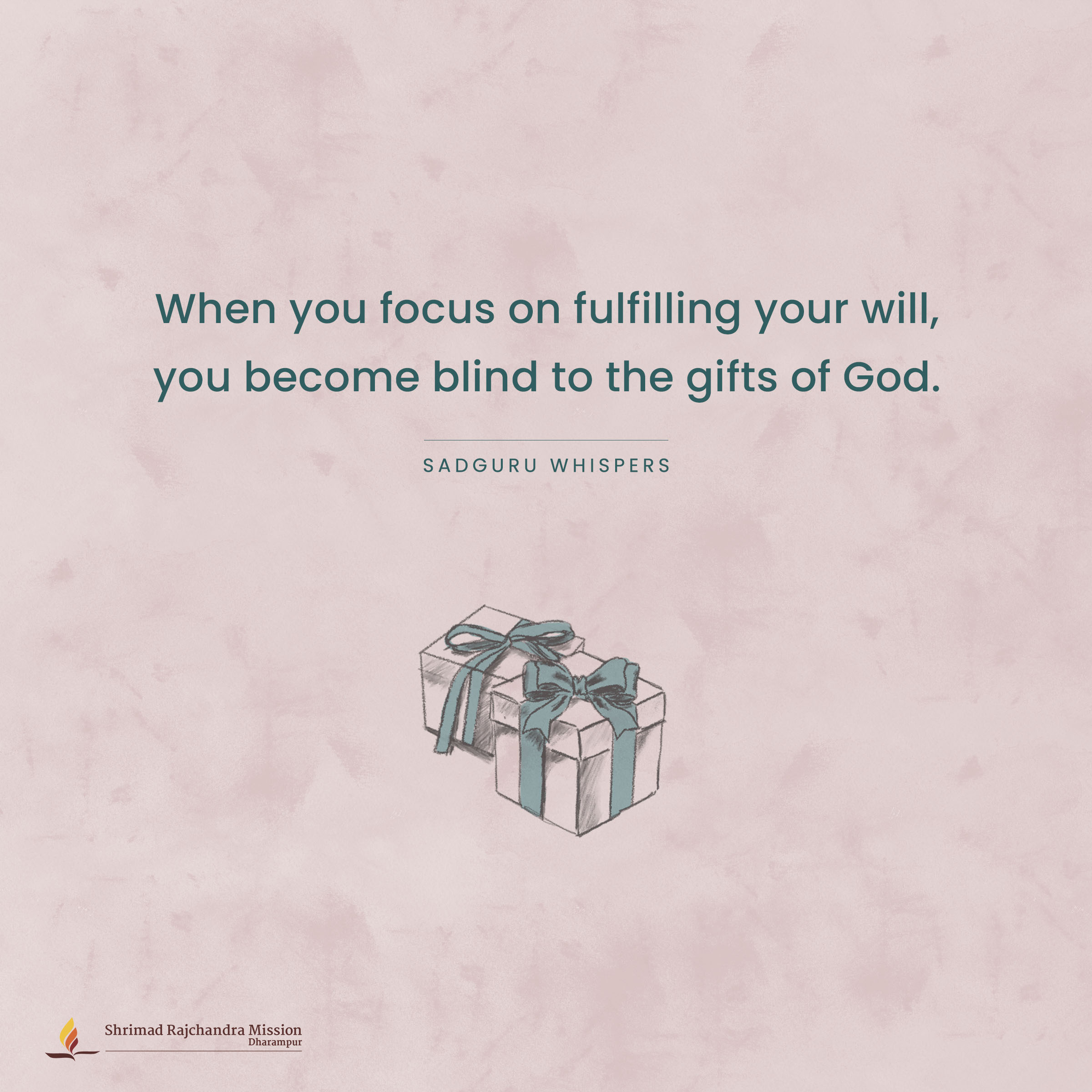 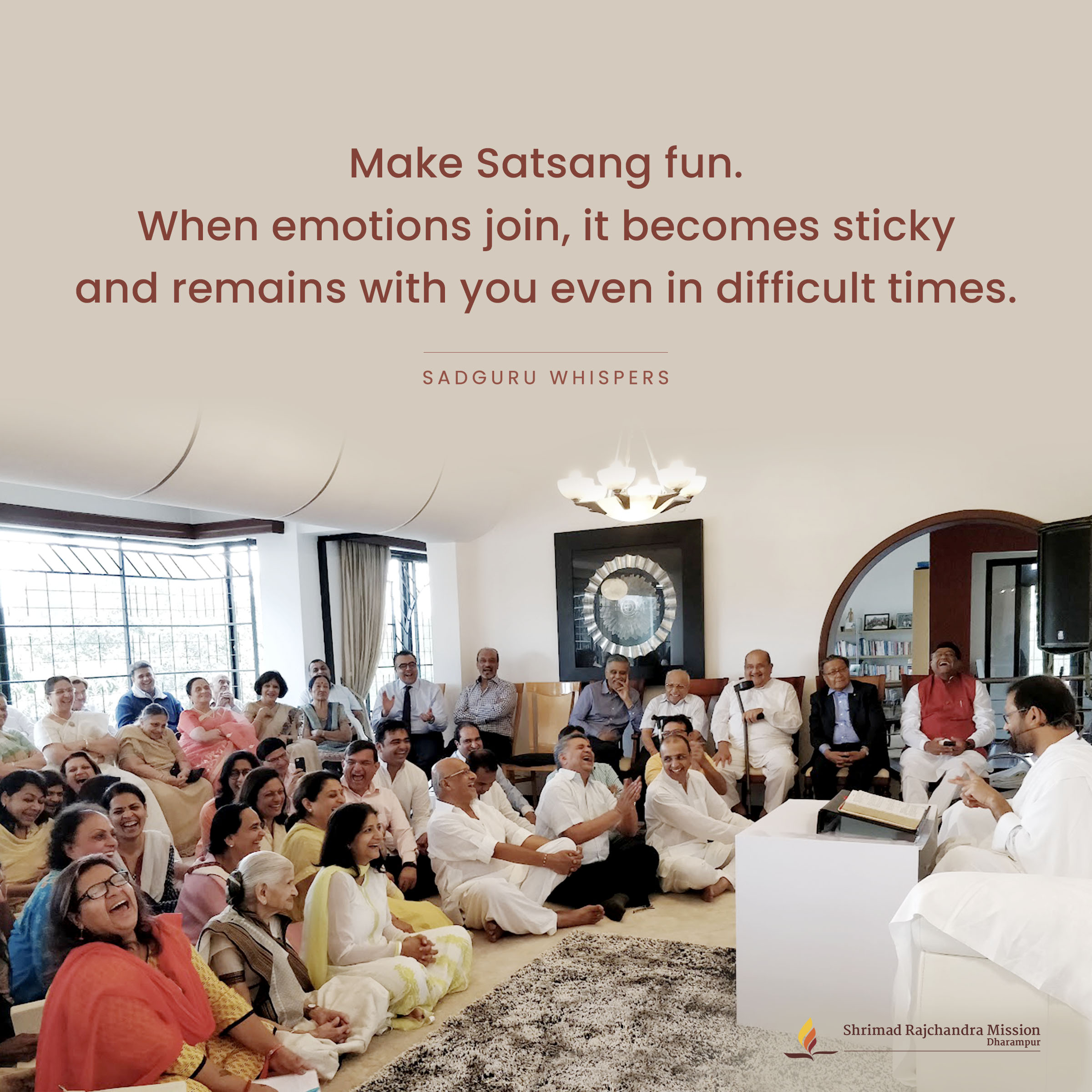 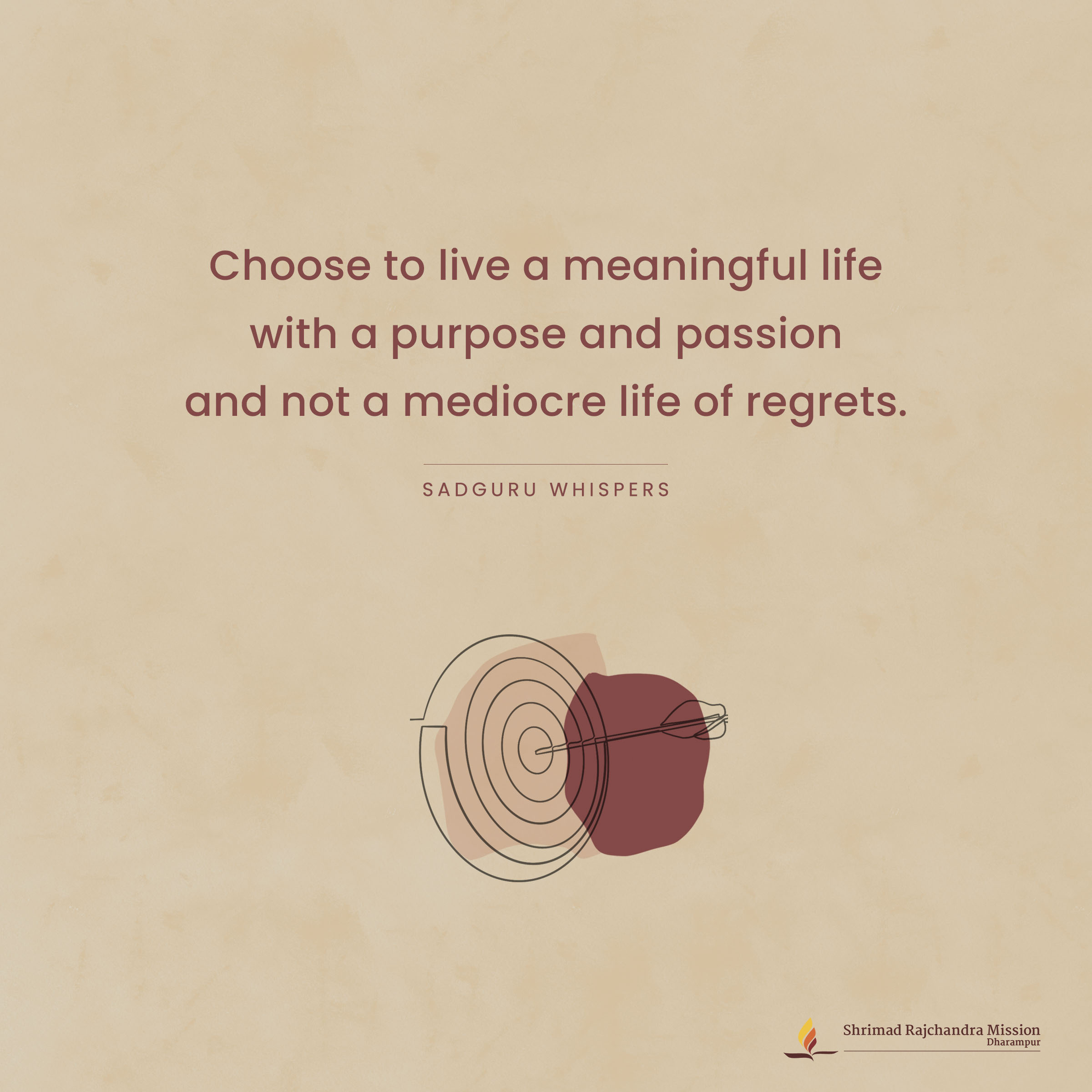 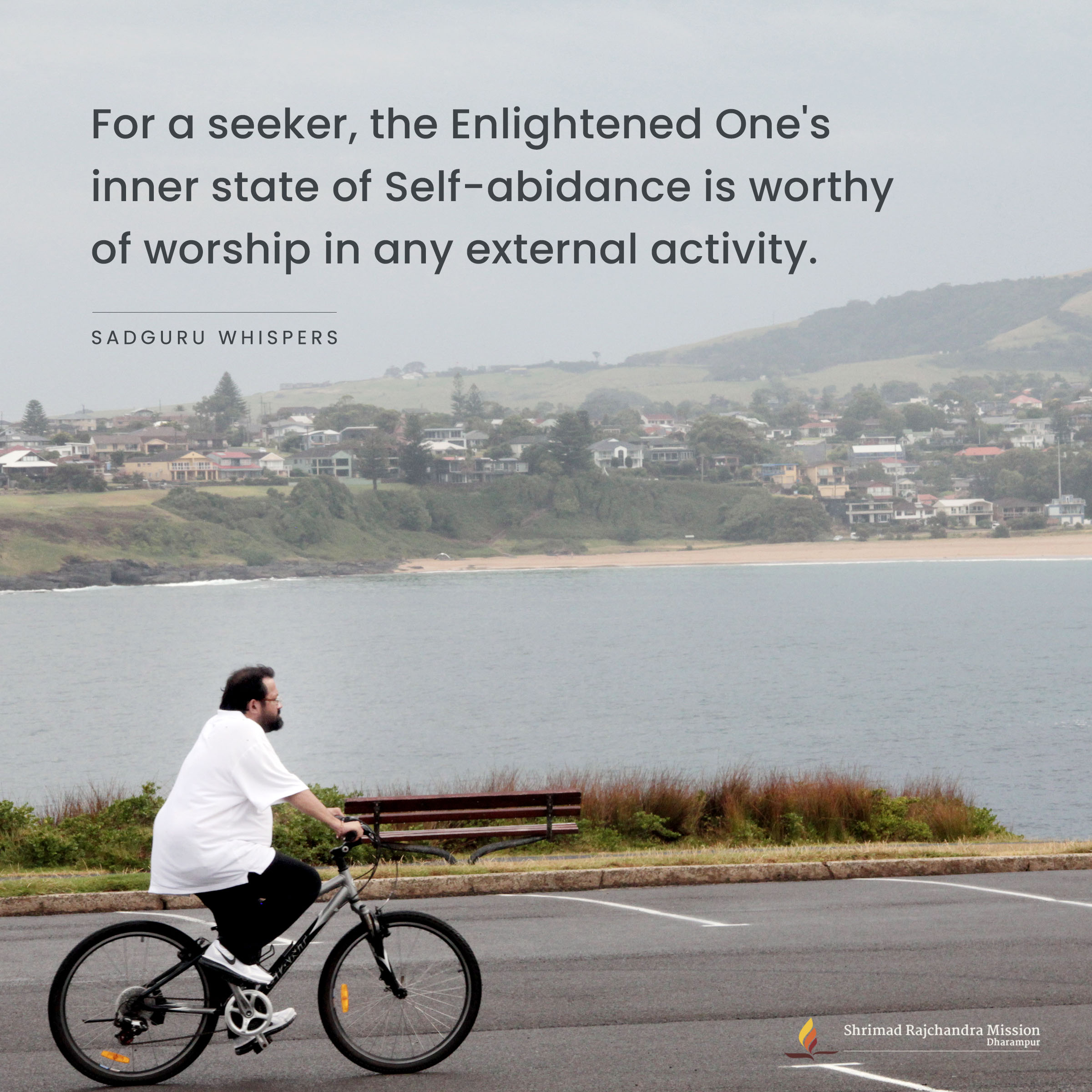